STUART SCHNEIDERMAN ASKS AND ANSWERS: DO WOMEN LIKE HILLARY? 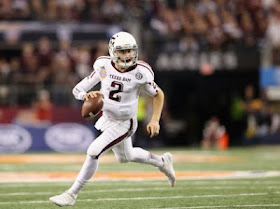 IT'S OFTEN SAID, JOHNNY MANZIEL aka Johnny Football, freshman starting quarterback at Texas A&M is too good a football player to be a white boy. Be that as it may, Friday's dazzling Cotton Bowl win--pitting the Texas Aggies against Oklahoma--only proves that Johnny has more than earned his nickname and then some.

It's always fun to read a little about a sports sensation. It makes watching even more interesting and fun. Anyway, here's his background in case you don't know it.  It's also interestiing to note, Johnny got into a scuffle with a friend last summer and ended up spending a night in jail.  Calling it a critical mistake in his life,  Johnny now says he's learned a lot from from his run in with the law and has had to make a number of changes in his life.

Another good football story is the comeback of Notre Dame.  Former champion coach for ND,  Lou Holtz sat down the the WSJ and talked recently about why and how he predicted  it was going to happen.  ND faces Alabama Monday night in the NCAA championship game. God willing,  I'll be there watching with HG!
Webutante at 11:28:00 AM