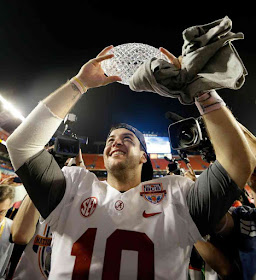 HEAVEN KNOWS, I'M NO SPORTS EXPERT. AND HAVE ZERO AGENDA IN SPIKING THE FOOTBALL.

Having said that, last night's BCS College Championship game between Alabama and Notre Dame is another testament to some undeniable truths:

1. SEC football rules in America. Period. Stanford, Oregon or Notre Dame no matter how good in their leagues, cannot begin to hold a candle to the tough guy, well-disciplined SEC heavy-hitters.

2. A team of nice slow white guys will never win over a gang of fast, heavy black boys who play with some smart country white boys with good looking, voluptuous girl friends who happen to be Miss Alabama.

3. Good colleges in the  north and east can't begin to compete for players against the SEC powers-that-be in the football recruitment department.  High school players want to go where the surest football action is, and it ain't anywhere on earth but the Southeastern conference.

4.  SEC college football, and specifically Alabama football, did more for voluntary intergration in the South than any single factor. Bear Bryant and his all-white football team simply got tired of being routed by integrated teams from the likes of LA.

6. Nick Saban is---with complete dedication--- one of the greatest football coaches of all time. Whatta guy!
Webutante at 7:29:00 PM